Where is it Going?

Everyone wonders where Bitcoin is going!  Some say it will go up to $10,000 by the end of the year while others speculate that it will be down to $5,000.  Many online investors have an interest in Bitcoin.  So, we’re repeating an article from cryptonews website that gives some thoughts on this.  We hope that you find it interesting.  The link to the article follows in case you would like to take a look at some figures that accompanied it.

A popular economist said that Bitcoin (BTC) can go lower, meaning that we haven’t seen the bottom yet. However, that low is just a stop on a way to all-time highs, founder of Bitcoin alpha hedge fund Adamant Capital, Tuur Demeester, stressed.

“We are way above the bottom of USD 3,000 [and] I don’t think we’re going back there,” he said, adding that if anything, “we may touch [USD 5,000] briefly.” He was talking at the What Bitcoin Did podcast, published this week, where he discussed their new report “The Bitcoin Reformation” and also commented on BTC’s bullish run to almost USD 14,000 in June and the possibility of another accumulation period.

He said that long-term holders were still holding, while a new generation of investors and “significant buying” were coming in, and then “the market got ahead of itself” – people thought of it as easy, as 2017-looking. And though the price went to almost USD 14,000, it was “a bit too much, too fast.” 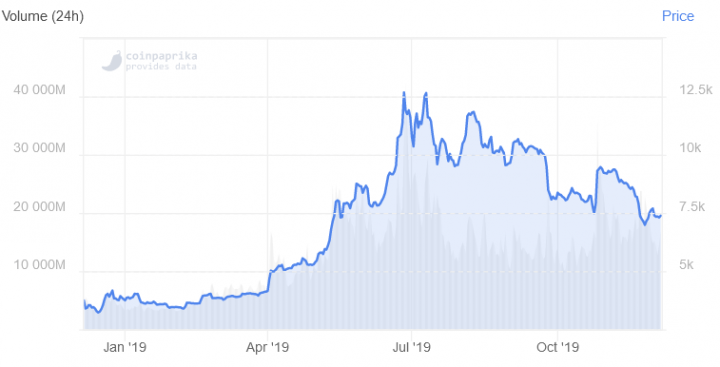 Demeester pointed to the early 20th century analyst Richard Wyckoff and his theory of accumulation, whereby the bottom sees accumulation, with the next phase being re-accumulation, he said. “You got a rally, and then the market needs a breather. It’s gonna need to catch its breath […] and shake off some more weak ends.” And since there’s nobody left to sell the asset, it has to go up – that’s how the market goes higher, he explained.

We are now in the re-accumulation period, the founder said, starting with the point BTC hit in June. And though there’s a possibility of hitting USD 5,000, Demeester said:

“In hindsight, I think it’s all gonna be a part of this wide band, that we’re trading in a range, and that this is all a setup to go into new all-time highs again, but it’s gonna take some time.”

Meanwhile, a recent report by SFOX (San Francisco Open Exchange) said that the price of bitcoin tends to increase around major U.S. holidays in the last 5 months. Furthermore, they’ve seen Bitcoin holiday movements in late 2017 and early 2019 as well, and noted that this happens particularly if holidays fall during bull runs. Also Google searches seem to be climbing right before and dropping during these holidays.

As for the potential reason, it’s likely not FOMO (fear of missing out). “Market participants may potentially be anticipating BTC movement during holidays, creating a self-fulfilling prophecy,” says SFOX. “We might be witnessing the crypto market preemptively responding to holidays simply because traders expect the market to move around holidays.”

Telegram Chat for your Crypto and Hyip reports: @HyipChatEN