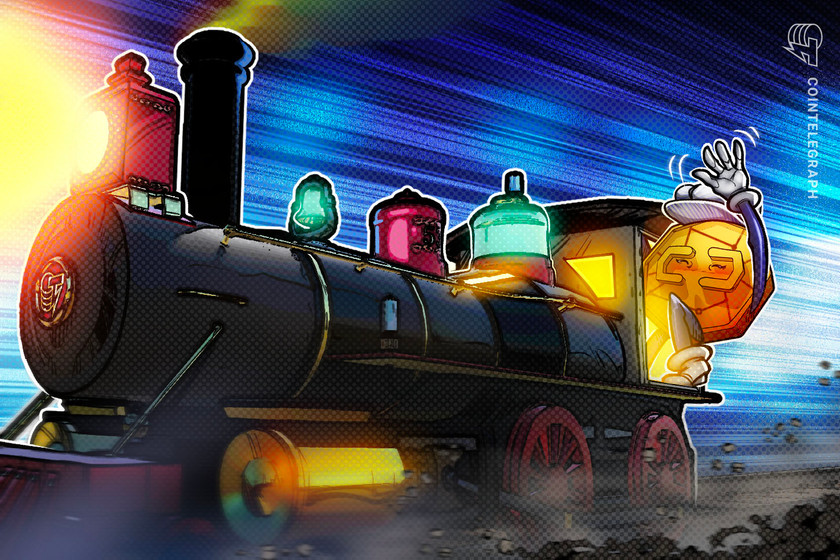 You are about to read a half-fiction witty story based on Stuart Hylton’s review of “the making of Modern Britain” and my interpretation of the blockchain’s impact on today’s world. I found it fascinating how the description of the industrial age front-runner technology resembled the awe and fear of blockchain in modern times. Some quotes are so relevant that changing the “railroad company” to “blockchain protocol” would give the same shilling.

After several “bubbles” (actually eight so far) and some huge announcements — remember Libra and TON? — I figured it was a good time to coin (pun intended) the history of the emerging technology that could be the biggest innovation in the last 500 years.

Why bother? From a distance of two centuries, it is difficult to grasp or even believe the impact that the development of the railways must have had at the beginning of the nineteenth century. In a similar manner, the common observer is stuck between a Bitcoin (BTC) evangelist preaching the dollar’s Doomsday and a big bank’s crypto skeptic. In fact, there is no clear trend of what to expect from distributed ledger technology in the next few decades.

The physical impact of railways was dramatic: “great mechanical horses, breathing fire and smoke and drawing impossibly heavy trains at unimaginable speeds, across a landscape transformed by the embankments and cuttings, viaducts and tunnels their passage demanded.” Stuart Hylton depicts the powerful role that emerging industry, often scary and speculative, has had on Britain, a selected case for a thorough review.

The author engaged me in informative and entertaining storytelling, which seemed almost a parallelled retrospective into the blockchain industry. Railways “transformed the way war was conducted and peace was maintained,” so can blockchain disrupt authoritarian regimes and propaganda machines. Early trains proved to be among the key drivers of the “dramatic industrial growth of the nineteenth century,” so can blockchain revolutionize finance which is the main artery pumping blood into the current economy. Railways forced “the state to think again about the policy of laissez-faire that was its default position,” whereas blockchain has yet to become the leading force in liberating people across the world and returning them their assets.

Below is a summary of what crypto did for us using the railway analogy (and the structure for my future articles on this topic).

The shock and the first crypto

Electronic currency and triple-entry accounting have preceded Bitcoin. The blockchain property of a recent block linking to the previous one using hashing dates back at least to 1995. Then, academics Stuart Haber and Scott Stornetta envisioned a way to timestamp digital documents for resolving intellectual property rights. They invented a chronological chain of hashed data to verify its authenticity in 1991, used in The New York Times issues four years later.

While the cryptographers didn’t intend to create an ambitious project, a series of discoveries inspired Satoshi Nakamoto to launch the Bitcoin protocol as a response to unfair and untransparent global banking. As Burniske and Tatar highlight in their book Cryptoassets, crypto gradually captured the minds of various people, from the cyberpunks to dealers and traders, until some journalist postulated an interesting question: What is this proof-of-work (PoW) anyway?

Ironically, Satoshi never mentioned “blockchain” in his white paper of 2008. It was the Bank of England that argued in 2014 about a “distributed ledger” being the “[t]he key innovation of digital currencies.” The following year two popular financial magazines raised awareness of the concept when Bloomberg Markets released an article entitled “Blythe Masters Tells Banks the Blockchain Changes Everything” and The Economist published “The Trust Machine.”

“What can be more palpably absurd than the prospect held out of locomotives travelling twice as fast as stagecoaches?” wrote The Conservative journal, The Quarterly Review, 1825.

Likewise, people didn’t get the point of blockchain at the start. Some hailed it as the premise of Bitcoin, emphasizing more on the cryptocurrency aspect of this technology. Others found reasons why it won’t be successful. Interestingly, banks themselves had been neglecting and later actively opposing the idea of sharing their ledgers with other parties. Not so long before they fully embraced the idea and began joining numerous consortia like We.Trade and R3.

“We see, in this magnificent creation, the well-spring of intellectual, moral and political benefits beyond all measurement and all price,” mentioned The Quarterly Review, now taking an opposite side at the opening of the Liverpool and Manchester Railway, 1830.

The first railways existed long before George Stephenson and were used primarily for cargo usage such as transporting coal from mines. When the steam engine unlocked the new powers, even then, people looked at the railway as a bulky, sketchy or even a dangerous “solution without a problem,” since there was already a well-established canal network. Steam locomotion had to pave its right to the future through the Rainhill trials of 1829. It reminds me of the struggle of blockchain proponents to convince VISA and SWIFT that their days are heading to an end or Andreas Antonopoulos winning a common ground before the Canadian Senate.

“No one will pay good money to get from Berlin to Potsdam in one hour when he can ride his horse there in one day for free,” said King William I of Prussia in 1864.

“Rail travel at high speed is not possible because passengers, unable to breathe, would die of asphyxia,” said Dionysius Lardner in The Steam Engine Familiarly Explained and Illustrated, 1824.

Despite the vast skepticism, railways continued to improve as few risk-takers could foresee a tremendous potential and put their money and careers at stake to build upon the new technology. Suddenly, railways challenged the very time and space: People who were limited in the territory by the horse speed could potentially be exposed to a much wider continent. Nowadays, in the middle of the Third Industrial Revolution, blockchain promises to confront the entire idea of value exchange and human nature by offering a brave new world. It is inevitable. So, what’s going to happen next?

This article does not contain investment advice or recommendations. Every investment and trading move involves risk, and readers should conduct their own research when making a decision.

The views, thoughts and opinions expressed here are the author’s alone and do not necessarily reflect or represent the views and opinions of Cointelegraph.

Katia Shabanova is founder of Forward PR Studio, bringing over 20 years of experience in implementing programs for IT companies ranging from Fortune 1000 corporations and venture funds to pre-initial public offering (IPO) startups. She holds BA in English philology and German studies from Santa Clara University in California and earned a Masters in philology from the University of Göttingen in Germany. She’s been published in Benzinga, Investing, iTWire, Hackernoon, Macwelt, Embedded Computing Design, CRN, CIO, Security Magazine and others.